D is for:  Dangerous words!
…a look at John Chapter 19

Sometimes….I get discouraged.  My computer pops up with all this bad news about our culture today.

I begin to doubt my ability to deal with all this depressing debauchery.  I despair.  I get distracted.

If  I’m not careful, I get derailed.

A derailed doubter is not of much use.

Then I read my Bible in John Chapter 19 — On the surface, one would think this is a downer description. John 19 describes the last moments of Jesus as He allows Himself to be tortured….for our redemption.

Then Pilate took Jesus and had him flogged. 2 The soldiers twisted together a crown of thorns and put it on his head. They clothed him in a purple robe 3 and went up to him again and again, saying, “Hail, king of the Jews!” And they slapped him in the face. — John 19:1-3

Remember Pilot?  – In John Chapter 18, Pilot asked, “What is truth?”  Like the culture which screams at me from my computer screen, Pilot has no compass…He has no Savior…yet the Savior is standing right before him.

Isn’t that the way some respond to Christ today?  They do not understand Jesus’ message, so they wave their collective fists at Him.

Hmmm….but Pilot has a nagging sense of fear and, perhaps, yearning, within him.  He tries to appease the crowds by creating a public display of beating, but he really does not want to kill the one he calls “The King of the Jews” :

Once more Pilate came out and said to the Jews gathered there, “Look, I am bringing him out to you to let you know that I find no basis for a charge against him.” 5 When Jesus came out wearing the crown of thorns and the purple robe, Pilate said to them, “Here is the man!”6 As soon as the chief priests and their officials saw him, they shouted, “Crucify! Crucify!”But Pilate answered, “You take him and crucify him. As for me, I find no basis for a charge against him.”7 The Jewish leaders insisted, “We have a law, and according to that law he must die, because he claimed to be the Son of God.”8 When Pilate heard this, he was even more afraid, 9 and he went back inside the palace. “Where do you come from?” he asked Jesus, but Jesus gave him no answer. 10 “Do you refuse to speak to me?” Pilate said. “Don’t you realize I have power either to free you or to crucify you?”                              — John 19:4-16

Pilot is desperate now. Pilot truly does not want to be the one who pronounces a death sentence.  He wants to remain “neutral” when in the face of the Savior.  Like a good politician, he wants to straddle both sides of the fence.

But, as Jesus has always said, ” you are either for me or against me.”

–Have you ever talked to someone about your faith only to have them react, “Well, that’s OK for you….But I don’t want to commit.”? — Case in point.

Let’s see what happens next:

Jesus answered, “You would have no power over me if it were not given to you from above.Therefore the one who handed me over to you is guilty of a greater sin.”12 From then on, Pilate tried to set Jesus free, but the Jewish leaders kept shouting, “If you let this man go, you are no friend of Caesar. Anyone who claims to be a king opposes Caesar.”13 When Pilate heard this, he brought Jesus out and sat down on the judge’s seat at a place known as the Stone Pavement (which in Aramaic is Gabbatha). 14 It was the day of Preparation of the Passover; it was about noon.
“Here is your king,” Pilate said to the Jews.15 But they shouted, “Take him away! Take him away! Crucify him!”“Shall I crucify your king?” Pilate asked.“We have no king but Caesar,” the chief priests answered.
16 Finally Pilate handed him over to them to be crucified. — John 19:11-16

The process of suffering and redemption has been set in place.

The man who held on to no “truth” released the author and perfecter of all TRUTH to be crucified.

Please read the rest of the heart-wrenching description in John 19.  I will not print it here.  Read it and reflect, but do not despair.

“D” is for devil.  I find it interesting that so many words which tend to distract us start with the letter “D”.    If I stopped reading John at the end of Chapter 19, I might end up depressed.

That’s right where the devil would like me to be… mired in doubt and delusion. But I will not stop with John 19.  I am a child of the victorious King who broke the chains of death as described in John 20 (read ahead!) and came to offer me….delight.

Sometimes…I get discouraged.  But, because of the reality of John Chapter 19 and the hope and promise of John 20, I need not despair.  When the world around me looks like its up for destruction, My Savior shines through and reminds me, “I am the ultimate TRUTH.  I will win in the end.”

Thanks for putting up with my alliteration.  I’m personally going to try to avoid those “D” words in the future. I, of course, cannot do this in and of my own strength.

I will rely upon a Savior … no doubt about it.

The Type “A” Lady 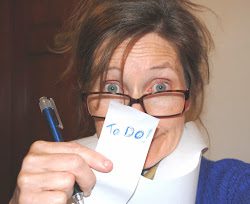 Printing these puppies to go in my car window! ...❤️👉Read about HOPE on my blog @typeachecklist ...#hope #future #message #corona #covid #covidkindness #god #thankful #positive #grateful #love #encourage #communicate
Thanks to my buddy who sent me this cool refrigerator checklist. @typeachecklist LOVES lists! . . ✔️ 1. What am I grateful for today? . ✔️2. Who am I checking on and connecting with? . ✔️3. What expectation of “normal “am I letting go of today? . ✔️4. How am I getting outside today? . ✔️5. How am I moving my body today? . ✔️6. What beauty am I creating, cultivating or inviting in today? . . Blessed Palm Sunday! Let’s welcome Jesus with joy and thank Him for the journey He took to save us! Look into His eyes of love. Fall into His arms of hope! ❤️❤️❤️❤️❤️❤️❤️❤️
Sometimes you need a new point of view. I remember how my life changed when I fell into the loving arms of my Savior. . I was at the end of my rope. I was at the end of all that I was. I flew open my closet doors, asked for forgiveness and gave everything to Jesus. 👉My circumstances did not change but I knew I would never face them alone again. . . I’m praying you fall into the loving arms of the one who loves you best. Give everything to Jesus. He is gently calling. ❤️
I’m #grateful Jesus is hanging out with us these days. . . Aren’t you? . . If you like this precious doll, my friend Vanessa makes them in her Etsy shop: https://www.etsy.com/shop/HalfQuarterInnStudio . . #jesus #comfort #covid #corona #god
In turbulent waters, the dolphin dances! . 👉👉You have turned for me my mourning into dancing...- Psalm 30:11 . . @typeachecklist is a dancer. I’ve been known to embarrass my children with my moves. 💃 Tapping,spinning, kicking, and a very strange form of Fosse show moves - I’m dancing through my house. See my blog for my baby dance 🍼. . . 🌊 In turbulent waters, you have to take time to dance. . . #encourage #trust #dance #joy #choosejoy #worry #god #covid_19 #corona
Check out my blog @typeachecklist for the tale of my undercover baby quarantine. 😜 🍼 🍼 ALSO.... 👉Send me your quarantine suggestions via blog message and I’ll publish a LIST! 👉LISTS: my favorite things to write! . Gotta go 👋. Baby crying! . . #corona #covid_19 #covıd19 #creative #quarantine #fun #noworry #coping